Well after having the hardest time getting information out of Honda, I swear they make it as hard as possible to find about the cars. It actually took about 2 months to arrange a test drive, then 3 months after that to get literature and booklets to tell me about the car and specifications and around 2 months to actually get to the point of buying one. 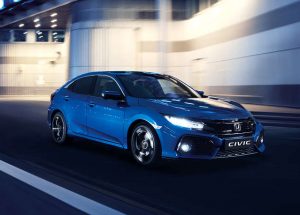 I really liked the look of the 10th Generation Honda Civic, since the 2006 Model they have been slowly progressing from a Hot-Hatch into a saloon style model while maintaining the Hatchback appeal (and boot hatch). Honda this time around have produced a Saloon, Coupe and Hatchback, sadly the UK only gets the Hatchback at this point but I suspect there will be a Coupe with the Type S or Special Edition TI / SI model. The whole world is actually getting the same basic shape, where as different regions have always had slightly or very different shaped cars, some of them as different as a Ford Fiesta and a Ford Focus, so not just like different grills and lights units. This is what they do between Mk 9.0 and Mk 9.5 where they changed the daylights from a row of LEDs to Neon Wire type stuff.

When I finally got my test drive, I was given the Honda Civic with the baby 1.0 litre 3 cylinder turbo engine, paired with Honda’s CVT Gearbox in Cosmic Grey for a full 8 hour test drive. First up, I really didn’t like the colour at all. The engine was nice, nippy and the turbo was perky and fast. I’ve read there is a few seconds artificial delay in the turbo’s spooling up, but I really didn’t notice this. What I will say is, CVT’s are quite loud, but add in the 3 cylinder and its generally quite loud when you push it. The trim was really nice, lots of gadgets. 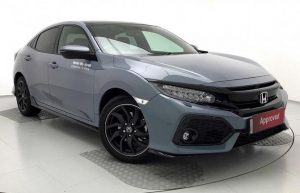 I later tried the 1.0 Litre 3 cylinder engine paired with Honda’s 6 Speed Manual Transmission in the standard SE Trim. Again the engine is plucky and nice, but wasn’t a fan of the manual box, not as nice as the older 6 speed used used in the 9th Gen or even with the 8th Gen both of which was really nice. Lastly I test drove the 1.5 litre 4 Cylinder Turbo with the Sport Plus Trim and CVT Transmission which was really really nice but horrible seats, so very many toys.

I had settled on the 1.5 litre 4 cylinder turbo engine with the Prestige luxury trim, the CVT Transmission and in Brilliant Sport Blue Metallic Paint. I also went with the Black Line Edition so it has a front, side and rear splitter and body kit all in Black, 2 rear spoilers and really quite nice gadgets.

Its amazing how many Gadgets the Japanese have crammed into this car, many of them come as standard on even the basic SE Trim, such as all around parking sensors, traffic sign recognition, traffic migration, auto hand brake, capless fuel tank and intelligent cruise control, lane keeping tech, adaptive speed control and more are all standard. 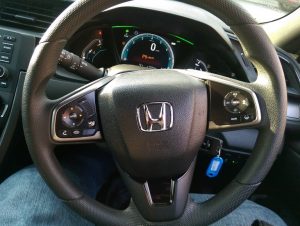 This is a masterpiece. Basically using the cars on board radar and proximity sensors, the car detects how close to the car in front you are (its variable from the full Audi to a fall back position), and maintains an active speed lock, both slowing down and speeding up with traffic and keeping the distance. It can also detect when a car cuts in on you and brake appropriately. It gets better, with the lane guidance the car uses the on board front facing cameras and radar to steer the steering wheel with the lines.

Speed Adaptive Power Steering
This is the MOST bizarre feeling, basically the slower your travelling the lighter it makes steering so you are more agile. The faster you are going (I’ve only gone 73 mph), the heavier it makes your steering so you can maintain smooth control. This means you can change lanes gently without worrying about flipping the car or any sudden jerking movements. Its ultra smooth moving lanes and fast at turning in the road. 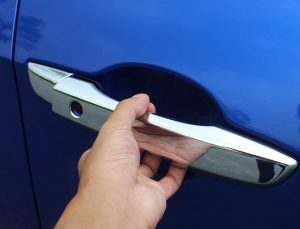 Touch Locking is a nice little touch, you can lock, alarm, and fold the power folding mirrors without taking the key out of your pocket. There is a button on the door handle which One Press locks and alarms the car, a Second Press folds the power mirrors and super locks the doors.

Inside the door handles by your index finger is a sensor which will unlock the door drivers door only, or if using the passenger door it will unlock all the doors. Lastly the boot has a sensor with unlocks when you touch the button, and then locks and alarms when you close it, this doesn’t unlock the other doors when using the boot only.

You can also use the remote, 1 press of the unlock unlocks the drivers door only, 2 presses unlocks all 4 doors. There is also a boot unlock button on the remote which auto locks when you close it. 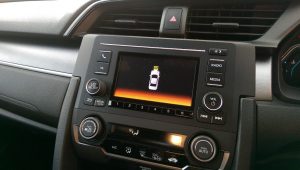 This is really quite fun, you have a 150 degree camera view, then you can change to a 90 degree camera view and finally a camera which points downwards so you can see rear bumper and whats directly below said bumper making it easy to see and park.

The Standard Edition or SE Trim, doesn’t include the camera but it does have all around parking sensors, with a nice big display which shows you which sensor is close, on a car layout plan. I’ve seen other cars which just tell you front or back but the Honda shows you which corner or which end, with increasingly loud beeps.

The prestige trim shows you a little diagram in the corner of the rear camera or in the map when going forward.