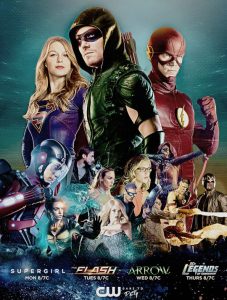 The big series is the Arrowverse which encompasses 5 different shows, which on various occasions The Flash runs out of the side of The Flash TV show and ends up in the Arrow TV show or on Supergirl. Some of the cross overs like The Flash in to Supergirl, neither The Flash nor Supergirl actually need to be watched to follow the stories but some others you need to follow them.

I saw an excellent post over on Gizmodo about the About Order to Binge on the Arrowverse. This encompasses The Legends of Tomorrow, Constantine, The Flash, Supergirl, and Arrow, although Constantine isn’t really needed. 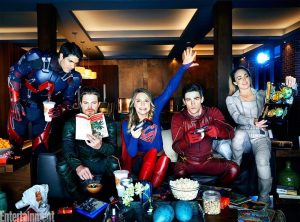 As the Gizmodo post says this is where it gets complicated and more difficult to follow, the image to the right from Entertainment Weekly looks kind of fun. It also kind of shows the comraderies at play in the Arrowverse along the characters.

There are a few other shows in the DC TV Universe which aren’t part of the Arrowverse which are well worth watching, such as Lucifer, Preach as well as Vixen Animated Series which is sort of linked to Arrow, and references are made in Arrow by Stephen Amell where he says he had an “Animated Adventure with Vixen earlier this year”.