I saw this story on Vox, and as a non-Apple using person aka Not-A-FanBoi, I don’t pay too much attention beyond slaying “Power User” Mac’s with my PC and listening to their excuses. Namely that Apple Pro’s are not being updated, and boohoo Apple essentially cripple the machine so its barely upgradable and hobble the software so you can’t use other vendors hardware.

I always highlight Hackintosh too, which is essentially a Frankenstein Mac, Mac Software running on non-mac hardware. I mean lets face it, there is no mac-hardware its just IBM PC hardware which mac runs on anyway.

In my eyes all these arguments are akin to moaning you don’t like McDonalds but still eating there 3 times a day, 7 days a week and still moaning about it.

When it emerged a few years ago that a bunch of Restaurant Chains were taking various amounts of staff tips or indulging in bogus deals, I didn’t like that practice, so what did I do ? I sure as heck, didn’t start going 5 days a week to tell them I didn’t like it, while still paying them.

I sent an email to corporate HQ of the companies I previous frequented, with details of my last few visits. I continued to explain I would NEVER attend their venue, would actively discourage everyone I knew from attending their venue and would continue to do so until their policy changed. Effectively I kicked them in the proverbial, they either fix the issues or lose my money and money I have influence over.

The article in Vox, highlights what I pointed out a month or two ago, that apple seem obsessed with making things thinner, lighter and more minimalist rather than capable of doing the job.

I’m a power user, my laptop (I use the term laptop lightly), weighs in at about 5kg, its has 2x SSD, 1x m.2 SSD, 2 Graphics Cards, an i7 Extreme Processor, a 330w Power Brick and it is a brick, 32gb of ram, and sounds like a Harrier Jump Jet when it gets going. I don’t really care about how heavy it is, how bulky it is, or how it looks.

What I care about is, from pressing the power button, to having Photoshop loaded, takes about 30 seconds and I’m ready to rock. I care about being able to plug a 32″ Output TV to my left, and a second 27″ monitor to my right while using Premier Pro to edit video. I care about it effectively rendering video in real time, about it cranking out Crysis on maximum settings with hi-res resource pack at 60fps+. Most of all I care about the fact that I can pull out the processor and upgrade it, I can pull out both the GPU’s and upgrade them, I can change out the m.2 and the SSDs, hell I can even move from Intel to Killer on the Wifi/BT or upgrade the ram. I can and have overclocked the processor/graphics and ram. 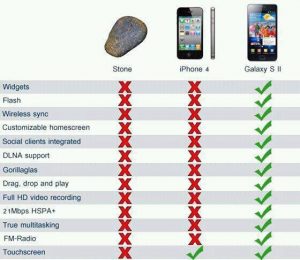 The machine is a Pro Powerhouse, can you do any of that on you’re outdated Mac Pro, hell could you do even half of that on your brand new Mac Pro ?

While some of Apples things are cool, but planned obsolescence and control freak nature is such a downer and stops me ever buying them.

I firmly believe while you, yes you fan bois accept inferior, sub-standard, crippled  and outdated tech and proceed to hail them as the messiah, you will always be stuck with more Tosh than Mac.

The meme on the right, is one of many which compares contemporary phones with iPhones and the story is nearly always the same. The iPhone has an array of red doesn’t have, and the competing phone has green straight through.

I owned the very first iPhone, you couldn’t even MMS, no bluetooth, if you faced the screen inwards towards your leg in your pocket, it would stop working until it cooled down, there were no apps, no flash for the camera, it were shite. I took it back to Carphone Warehouse who exchanged the phone over the screen not working before I figured out it were because I face the screen inwards for protection.

There is an article on Gizmodo which compares the original iPhone 1 (2007) to the iPhone 6S+ (2015) and its shocking devastating how little has actually changed, not to mention how feeble the specs are 1gb of Ram, Dual Core Processors, its almost embarrassing.