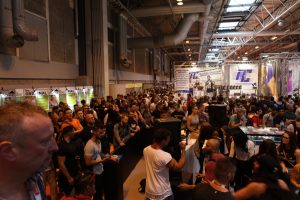 I recently attended the Body Power Expo in the capacity of a Photographer, this were my 4th Annual Body Power event. Its interesting to see the Fitness and Health scene in the UK Evolving as this expo is almost like a “snap shot” of the industry; you can almost watch its growth and diversification.

In some ways it reminds of my first Gym 1996/7, what looked like an old public toilet on the edge of an industrial complex (Mirrlees Blackstone), it had concrete flooring, a bit crap cord like carpet, a  so old I’m saying a wireless, it were stuck on local radio which were KISS or Galaxy. No heating, no showers, a toilet with the box like 7ft high. I think 2-3 machines a bike, an form of elliptical and a basic rower. Hardware wise, a dozen bars, a tonne of plates, half dozen benches oh and a Rack in 1 corner and that were it. Many gyms were like this to various extents. 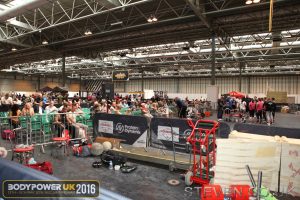 Thinking back over Body Power its the same thing. This year there various brands some old and some new choosing to launch their brand or new product at the show. My first year, there were literally no newbies, it were all the old guard as it were.

I think the first major new brand I saw launch there were NOVO who make protein bites, which look like a quaver only smaller, don’t taste as good as a quaver though, but its protein and snackable. It falls in the “flexible dieting” and “protein snacks” categories.

This year existing companies were launching new products, Reflex nutrition launched their new protein coffee, with a stand dedicated purely to the 1 product. Mars were pushing their new Snickers and Mars Protein ranges and various others. On a smaller scale, some new brands like “Serious Ammunition” with their Bullet Reloaded product, then “Active Sport Nutrition” were  launching Zombie Juice, another new brand were TNT. There were sooo very many others which I can’t list here.

Some of the past product launches are now rapidly growing into major brands; NOCCO is one which stuck in my mind. I commented on in another blog post, which is an awesome product. Another would be NOVO who make protein bites (crisp), 3 yrs ago their stand were small, it were about 5-6x bigger this year with some fairly big name athletes on it such as former Miss Netherlands Dounia Rijkschroeff.

The Big Boys Roll In

This year also some of the old guard attended for the first time like MyProtein, who came packing mini-guns to mow the competition down. I think they literally brought EVERY athlete they sponsored.

USN were dominating the expo, they sponsored the main stage, the pro IBFF show, they had their own little mini stage, which were HUUUUUGE. One their newer products tastes amazing the B4-Bomb Extreme (Cherry). I tried sooo many of their products.

Which I guess is the point of all the samples, to try them all so you pick the brand for life. I must have tried 40 different proteins, a dozen pre-workouts, 2 dozen bcaa’s and various cookies, muffins, doughnuts and bars of the weekend. A few different products I have gone on to purchase.

This year there were strongmen, insta-famous, inspirational, physique, bodybuilders, body transformers, bikini, clothing, equipment, supplements, food, snacks, MMA, boxing and even medical services making the event what it is.

The list of names is, and were endless, the top of their game. I really wouldn’t know where to start with such a list.

However some of the biggest pullers were Paige Hathaway and Michelle Lewin on the FitFuel Stand, Steve Cook on the Optimum Nutrition Stand and Christian Guzman on Alphalete Stand.

Below is a 360 view of the queue for Paige Hathaway, the queues for the others were equally impressive but had no vantage point.

The fitness and health sector in the UK is growing at a crazy pace, a truly astonishing rate.

The take away from the whole show were about inspiration, and improving your health and learning. I saw girls meeting Michelle Lewin who were close to tears and gushing. Telling her how they were inspired to lose weight, hit the gym, overcome bullying and more. I saw guys telling CT Fletcher he helped them to push harder