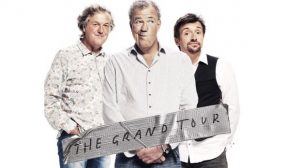 A while ago it were all over the papers that Game of Thrones were destroying piracy records around the planet, almost like some kind of parady of a greed wedding smashing records.

Today its been revealed a mere 4 episodes into the first season that The Grand Tour has Duped The Iron Islands, The Mother of Dragons, The Lannisters and everyone else, not to The Iron Throne, but to The Piracy Throne.

The Amazon Original “hit” complete with a £160,00,000 budget has been slammed by critics and reporters as tired and more of the same but a bigger budget. The statistics show with 18,000,000 illegal downloads, over the first 3 episodes, which covers a total of 15% of the illegal entire downloads (tracked) in that period, or about £3,000,000 of membership fee’s for Amazon down the pan.

I suspect Amazon will go out of their way to try and convert these pirates with some killer sign up offers. We recently saw them offer a discounted prime membership, now would be a fantastic time to offer existing members the chance to extend and perhaps invite friends and family for a discount.

I’ve been unable to find official Amazon figures for downloads and watches or however they track them, but Amazon have stated its broken all premier records globally for any other Amazon show. Looks like Clarkson is earning his £10,000,000 pay for the show and proving its a winner.

Top Gear vs The Grand Tour

The Grand Tour with Clarkson, we only have Piracy Figures not actual paying viewings. Premier Episode 7,900,000, 3rd Episode 4,600,000, if the numbers continue to tumble it maybe a similar story. However these are pirate / illegal viewers. Amazon Prime members get free access as part of their prime membership, so my guess is the paying numbers will drop a little but not much as many will series watch like I did as my own time.

On a side note, what the crocodile hat is that on Hammonds face, as the owner of a beard, I’m offended.