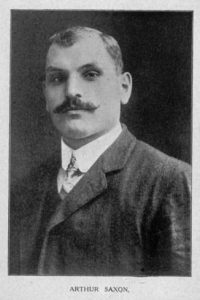 Its OFFICIALLY Christmas Day, well as of a few seconds ago its Christmas Day. So I’m posting about one of the men who inspires me to be stronger.

Much is said of contemporary strongmen like Eddie Hall, Zydrunas Savickas, Brian Shaw, Hafthor Bjornsson and the legends of old such as Mariusz Pudzianowski, Bill Kazmaier and Jon Pall Sigmarsson. Half of those legends I have met through my press photography work and all really nice if not monster sized guys. All the top of the Worlds Strongest Man and Strongman World past, present and future.

However long before any of these men were born and possibly even before their grandparents were born were a man called Arthur Saxon, born 28th April 1878 and died 6th August 1921.

Arthur were known as “The Iron Master”, and along with his brothers were the Saxon Trio, he wrote some of the earliest literature about strongman. On a side note I believe all Arthurs written work is now free of copyright. They can be downloaded freely, but I suggest buying them in hardcopy for a few pounds each.

Development of Physical Power via Amazon.
Textb00k of Weight Lifting via Amazon
Being Strong (Writings of Strongmen of Old) via Amazon

This man were forged of iron and fire, no drugs, no steroids, no growth hormone and no gyms, just absolute strength, raw power, and pure determination… oh and a rather dapper moustache.

This man is reported as tossing 90kg (200lb) dumbbells overhead as if almost juggling with them, like it were an insignificant inflatable toy dumbbell. He could Bent Press (not bench) 168kg / 370lb overhead with a single arm, just to put that last lift into perspective in Worlds Strongest Man 2016, the Jumbo Dumbbell Press is a 115kg circus dumbbell.

Once while supporting over a dozen men and women with his legs (picture below) in Cambridge, the weight of himself at 200lbs, and the men/women along the frame resulted in the stage collapsing underneath the focus weight (think shoe in snow) injuring him quite badly.

With a good sense of humour, Arthur and his brothers used a lead-shot loaded dumbbell for a £250 prize challenge. All you had to do were lift up the dumbbell. The brothers left it on display at the entrance to their show 24/7 and watched as various local bodybuilders and strongmen lifted the weight. At each nights show Arthur lifted the weight with ease above his head numerous times and issued the nightly challenge. 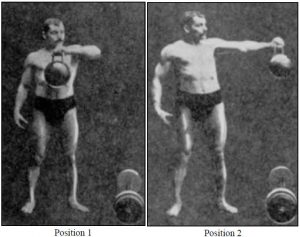 Various strongmen and bodybuilders sauntered up on stage smirking with dreams of walking away with nearly a years wage in prize money, Yet none could lift it. What they didn’t know is, the Saxon boys had deloaded shot from the dumbbell reducing it to 150lbs during the days and reloaded it up to 300lbs at night which Arthur lifted with ease before they tried..

This is the one which shocked me, in Birmingham, UK he were challenged by Mr. McCann’s who were known for beating Eugen Sandow some years earlier.

McCann has a barbell at Gough Street Gym in Birmingham, weighing 100kg / 222 lbs, and two x 25kg / 56lb square weights (think weight plates). They told him no one had ever lifted even one of them with 1 hand (assumed pinch grip).

Saxon placed the 222lb barbell overhead with his right hand while holding both 56lb / 112lb in his left hand in a arms length rise position liking his arms in an L shape. You can see the arms length hold above with ring-weights (kettlebells), but do it with a pinch grip at 112lb / 50kg with a weight plate is insane.

“I have broadminded enough views on this important question, i. e., “What is real strength?” Therefore, if a weight-lifting competition were held, I should like to see quite a number of lifts attempted, as is the method on the Continent, and to see each man go on with the lifting without too many opportunities for rest, so that we should not only ascertain who is possessed of greatest momentary strength but also who is possessed of enduring strength as well, and it is a combination of these two which makes real strength.”

That sounds a lot like the modern Worlds Strongest Man, doesn’t it ?

In my head, if Arthur were in WSM, I see him as being somewhat like hybrid of Jon Pall and Pudzianowski, only shouting “I am the Saxon Dominator”, a true showman and powerhouse. 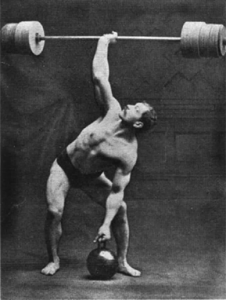 Just before the turn of the 20th century in Sheffield at the Grand Music Hall while performing with his brothers as the Saxon Trio, Arthur were bragging how he could out lift any man alive. This included Eugen Sandow who were the reigning king of strongman in England, and as fate would have it he happened to be in the audience that night.

Sandow came up on stage to put this rumour to rest once and for all, with every intention of showing Arthur up as a liar. The two titans of lifting went toe to toe with the goal of deciding who were the strongest man in the world.

They appeared fairly evenly matched until Sandow were unable to match Saxons bent press (right). He tried many times as the audience and Saxon brothers giggled and jeered, he were just unable to lift the weight over his head.

Sandow like a girlie-man went crying to the courts, and due to a misunderstanding by the judge, Sandow won the claim and were therefore Arthur were unable to claim he were the worlds strongest man. Everyone knows Sandow were a cry baby and thus Saxons record bent press still stands today getting on for a 100 years after his death.

Saxon were an advocate of Physical Culture as he called it. He believed you had to train everything, and that were the key. He puts down injuries and broken athletes to under-developing all the muscles. Its interesting that critics back in his time used sporting injuries and wear and tear on an athletes body to decry sportsmen. 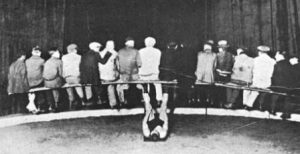 “I [don’t] consider a man a really strong man if he is in certain parts developed out of proportion to others. If a man has tremendous arms and chest and weak legs then he is only half a strong man.

If he should have strong legs and arms and weak lungs or a weak heart, then again he is by no means entitled to be called a strong man… Some day the inevitable breakdown will occur which will cause carping critics, always ready to attack physical culture, to point to such a broken-down athlete and say, “Here is proof of the harm done by physical culture and weight lifting.”. The cause really is that this man has not properly understood physical culture, and has developed one part at the expense of another.“

This is still the case day, how often do you see guys with rounded shoulders from excessive chest work but neglected backs. How about guys with chicken legs and huge shoulders, or even those guys who use straps to lift less half their bodyweight.

Saxon vs Beer and Food

Arthur were nothing less than a beast both inside and outside the strongman world. There are stories of him and brothers cracking open a barrel of lager beer and running back and forth filling their jugs up between lifting sets. More often than not drinking the whole barrel in a single session. 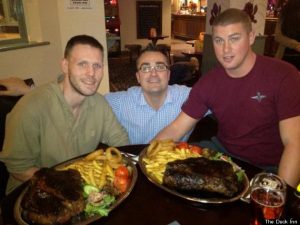 150oz Steak at The Duck Inn

One newspaper reported Saxon in order to impress a girl, he gripped a bottle of beer between his feet, grabbed a 113.4kg / 250lb barbell and lifted it into a bent press. Once in position he reached down with his other hand, and proceeded to drink his beer while holding the barbell above his head perfectly still.

It were also reported he would drink anywhere between 50 and a 100 bottles of a beer on an average night.

You don’t even want to know about his eating.

A typical main meal would be 4.5kg / 10lbs / 160oz of beef / mutton / meat with plates (plural) full of fruit, vegetables, cakes and cream. The picture to the left is of a 150oz steak challenge which The Duck Inn in Redditch, its 10 inches wide, 14 inches long, and 4 inches thick. Its bordering on a doorstep.

Its reported he trained excessively and extreme intensity 7 days per week. Its hard to believe with all that eating, drinking and intense training he gets time to sleep, but he stresses the importance of sleep too.

Some of the most brutal and fun exercises were created and named by the Iron Master. I actually like a few of his moves. His moves have various names these days but originally they were named after him or by him. Many of these movements you won’t see in your every day gym, infact most people will look at you like your insane when you do these moves.

This builds excellent unilateral explosive and functional strength. Start light and work up. 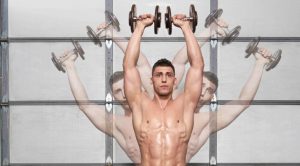 Saxon Side Bend Photo by Muscle and Fitness

You see people all day long holding a dumbbell at their sides and leaning as if reaching deep in to their pocket and then return only to reach into the other pocket.

The Saxon Side Bend is performed ideally using dumbbells but you can use with barbells, medicine balls, weight plates to help building up. With dumbbells, stand with your feet at shoulder width apart and your knees slightly bent. Raise the dumbbells overhead, arms slightly bent, palms facing forward and dumbbells as close to touching end to end as comfortable.

Keeping your core, torso and glutes braced with the dumbbells steady, slowly and under control bend or lean to one side as far as is comfortable. Don’t lean forward or backwards and keep your arms in line with your body don’t allow your arms to over lean. Then return to an upright position, repeat 6-8 reps per side.

This takes a blowtorch to your abs, core and obliques, better leaving this towards the end of you work out, and a few times per week. I often superset this with Pallof Press and Pallof Rotations for a killer core and mid-section work out from abs to spine.

The End of the Iron Master

Arthurs demise were a tragedy, after going to war and fighting in World War 1, he suffered from malnutrition, and a whole host of health related problems. This meant no matter how hard he tried to bring back he legendary strength he failed to produce due to those problems.

On 6th August 1921, at 43 years old, Arthur died from pneumonia, leaving only his Legacy behind.

To this day his Bent Press world record of 370lbs still stands, as does his “two hands anyhow” at 448lbs. The legends of his showmanship, humour, charisma and spectacular functional strength live on and continue to inspire many, myself included.

The Saxon Side Bend Photo is taken from Muscle and Fitness, they posted an article on this very move which is worth a read.