Not even Gandalf can stop this Barnsley man from passing. This is fairly old story, but I forgot to publish it at the time. Christian Whiteley-Mason, 42 from Barnsley has taken his driving test 33 tries and £8,000. Mr Whiteley-Mason had lessons with 14 different driving instructors, a total 85 driving lessons, over a 25 years period. 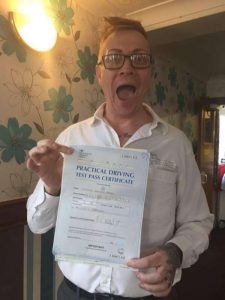 Christian had 56 lessons with his first driving instructor who finally told him to quit, its never going to happen, there were one Examiner who he hate seeing who would always fail him.

In 2017 Christian got a new job which required more travel, he grew tired of taking taxi’s and relying on others for rides, so he dug out his notebook and arranged a refresher course.

He was so determined to pass, and preyed to not get the same examiner from all those years ago, 33rd time lucky he passed.

Christian is quoted as saying “I’m so proud of myseld. Its changed my life to be honest. I delf like I’d achieved everything I really wanted to achieve, this was the one thing left I had to do”.

They say second time pass people are better drivers, what does that make Christian ? Perhaps it makes him the next Stig ?