Sometimes these cartoons are more a social commentary or contemporary reflection of the current state of affairs, I’m not sure what the correct term would be. While they are fun and laughter inducing they show the sorry state of the world today and how reality contrasts to the fantasy world children inhabit. I’m almost jealous!. 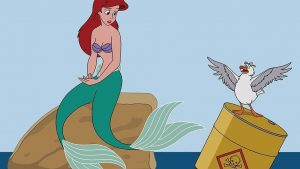 It would seem British based graphic designer Tom Ward from Woking intended exactly that reaction from people. Tom Ward said he wanted “to bring to life the times we in and communicate topical issues in a relatable way.”, which is a far more elegant way of saying what I attempted. He continued to say “some have a darker message while others are more light-hearted”, which is pretty accurate I certainly smiled a few while others made me consider the stark reality they portrayed.

I saw some of these a while ago, but I was unable to locate the source and felt the artist should be credited. They now popped up in my news feed via the BBC who have accredited the original author Tom Ward (Insta) / Tom Ward Studio (Website) so I figured I would now post them.

I happen to detest selfie sticks, but I can’t deny the are effectively MySpace Angles for the current generation. This one made me giggle. Most people will have missed this, but rather than use Bluetooth technology to trigger the device, there is an old school cable plugged into what appears to be a Dell Streak Mobile phone. Pinnochio is clearly analogue and not joined the digital revolution yet.

The recent Beauty and the Beast live action movie with Emma Watson introduced us to Disney’s first openly gay character Lefou and its about time too. Loving the symbolic message that the traditionally handsome prince charming is elevating gay rights, not sure about Lefao’s appearance and I haven’t seen the movie yet to comment.

One of the ones I saw a while ago (Around Christmas) was this one of Robocop with a Gatso Speed Camera, busted from Detroits numero uno to menial traffic enforcement. I’m not 100% sure what the intended message is here, but I’m taking it to be the wastefulness of the government spending billions on tasks which cost thousands or maybe its the replacing of the human element which is at Robocops Core in both movies.

This has to be my favourite of the images, from the look of surprise in horses faces, while the riders seem undeterred or even bothered by the fact the fox is fighting back.

If you look back over Tom’s work on his Instagram, he does these little series for fun, so its well worth following him and considering him for work. When I come to need a new graphic, I’ll certain consider speaking to Tom and of course I’ll report back with any info which may help.