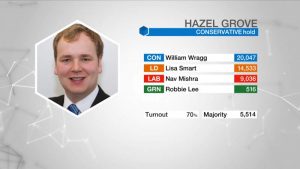 Well the overall result is as I expected in that the Tory Government has just held on, albeit I didn’t think they would need a coalition, I actually thought would be labour who may need to form one. Alas my local area, that Tory [email protected] William Wragg won with quite a significant margin, almost 3o% more than the nearest rival which were the hard campaigning Lisa Smart.

Liberals did better than I expected given that I firmly believe the nearly a decade they had control of the actual council they have slowly killed the town. This was a town which some years back was talking about applying to become a city, around the time Preston was promoted to City if I remember rightly. 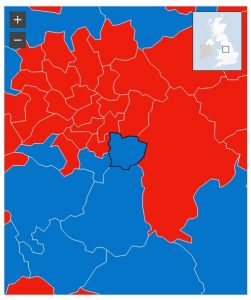 Now the town has no nightclubs, no nightlife, approx 1 in 5 shops are empty, the once huge celebrated market no longer exists, now its artesian stall and vintage indoor stuff. Surrounding towns Ashton, Gorton, Macclesfield, Hyde and various others have thriving jumbo markets. Stockport once had a market so big that my mum remembers people used to come from miles around on coach trips to shop in Stockport and visit the market. It once was growing so much they were planning to close a car park on Saturdays to put more stalls in, there were even stalls setup on steps they were running out of space. Now you can drive through there on a Saturday afternoon.

The Mary Portas Pilot Scheme gave the town £100,000 (along with £362,000 more from matched amounts and other sources) and a report on how to improve the town centre which was failing. Lots of that money was spent on Christmas Lights, Arts Centres and Shop fronts while Portas was pushing it towards the market and rejuvinating it. The recommendation to lower parking costs or even scrap them was ignored, as was a plan to lower business rates.

The loss of any type of night life, the market, deteriorating transport links, high parking costs, putting the town into the death throws as it were all under the LibDems watch.

Perhaps this could change the area, and get things moving the right way in this little part of the country.