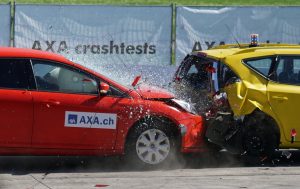 Ben Williams, 24, from Sutton Coldfield has failed his driving test when DVSA Examiner Keith Priestly accused him of “braking too quickly” and causing whiplash. Luckily on this occasion Mr Williams Driving instructor Elaine Rose were in the rear of the car and she is reported to have argued that Ben executed the emergency stop manoeuvre perfectly.

Ben who is an Engineer said “It was a nightmare. Its nerve-racking enough doing a driving test – let alone the examiner trying to sue you afterwards. He asked me to perform the emergency stop, so I did, and then he started groaning that I braked too hard and fast… but I felt fine and so did my instructor”.

His test were cancelled due to the examiner not being fit to continue the test, which gave Mr Williams a free retest. A few weeks later Mr Williams revived a letter from solicitors saying they were lodging a claim for damages to Mr Priestly for whiplash. On a side note, this is what happens if your test is cancelled due to bad weather, heavy traffic or anything else which isn’t the candidates fault.

Not So Emergency Stop

Sorry pedestrian peoples, your dog, your 3 year old child and your granny need all the kings men to put them back together, I decided to plough you down because, well I didn’t want to brake too fast in case I got whiplash.  My examiner said that’s fine but you’re all dead so all good, doesn’t matter.

The emergency stop is essentially the ONLY manoeuvre you accrue faults and fail for checking your mirrors and being too slow, the key is EMERGENCY, not when its safe, convenient and legal, it means RIGHT NOW!

Lets do the maths, 30 mph, you’re travelling at about 15 meters per second and thinking time 10 meters. The very idea is that you cut the time in half and save lives. My instructor John told me off for worrying about lurching him forward and other stuff, STOP!

A few weeks later Driver and Vehicle Standards Agency (DVSA) wrote to Mr Williams saying Mr Priestly has been disciplined and the case has been dropped. A DVSA spokesperson has said “Mr Priestly no longer works for the DVSA. We can’t comment further”.