I don’t know about every one else but I had a heap of boxes from Amazon, including a somewhat surreal incident where Amazon delivered a Russian Doll inspired series of boxes. I always reused the Amazon Packing Paper, often as note paper, or lining paper for paining / spraying and sometimes even as packing paper again, I just roll it up, rubber band it and its there when I need it. I also reuse the boxes but can’t reuse the packets sadly. 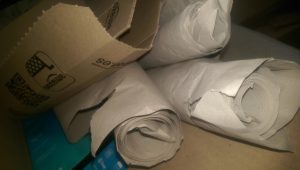 This prime day Amazon gave me a Russian Doll Box. The largest Box had 2 x 6ft SyncWire MicroUSB, 100ft / 30m Expanding Hose Pipe, 2 hair conditioner products and 1 slightly smaller box. Inside the slightly smaller box was 1 case of Reflex Nutrition Protein Coffee, Perspi-Guard 50ml, Beard Oil, and other toiletries. Inside the larger of the 2 smaller boxes was 2 more cases of Reflex Nutrition Protein Coffee, in the smallest box was an Amazon Echo Dot, Amazon Fire Stick and a few small items. I kind of wish I had taken photo’s of it as it were truly surreal. The Amazon Echo was in separate box on top of the other boxes.

I reuse this stuff for all sorts. Mostly I use it for notes and masking paper. If I’m drawing, painting, spraying or anything like that, I use this to mask off areas. Like I’m going to do some swirl marks on he car, so I purchased some Hycote Clear Lacquer also from Amazon Prime Day. I’ll use the packing paper with low-tac tape to protect area’s around where I’m working.

I also use it when doing messy tasks or when my sisters kids are over being messy. It can just go directly into the Burnable Skip at the Recycling Facility or if not too messy into the Local Authority Paper Recycling bin. 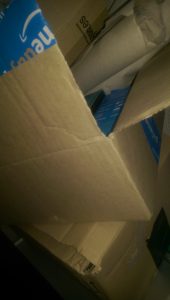 I reuse the smaller A4 Paper size boxes for home storage. The biggest boxes I use for Charity Donations, whenever Amazon send me the large boxes (Approx 20″ x 30″), I have a sort out and fill it with Charity Shop items.

My purchase of an Amazon Echo means my old small bluetooth speakers are no longer required and only worth £10 on ebay, but I can Gift Aid them to the local Animal Rescue Charity. The FireStick means I can donate my old NowTV box which I paid £20 for with 6 month entertainment pass, but is now only used for BBC iPlayer and 4-On-Demand, that can go to the Charity Shop too.

Its well worth donating your old items which are often replaced by Amazon orders to Charity, use the Amazon Boxes as the Impetus to have a sort out. Everyone has a cupboard or drawer or something which needs sorting out, the Amazon Box is your proverbial kick in the ass to get around to it.

Failing that, the Amazon Boxes work well for packing and storing your goods, or shipping gifts to friends and family or back to the seller from other places (as if you shop anywhere else).

I am visiting the Charity Shop on Monday with a Pressure Cooker, Now TV box, Bluetooth Speakers, while I was sorting the Pressure Cooker out, I decided to get shut of a load of plates which were bought for a family event but not used in years. This lead to more kitchen sorting out and now I have filled the medium and large Amazon boxes.

After the Charity Shop, its on to the recycling facility to get rid of 3 bags of rubbish, then I have to get to cleaning and touching paint up which all this sorting revealed.

Now its your turn to make use of those boxes rather than just flatten them and recycle them.