How would you like to turn to £52 / $60 into around £100,000,000 (One Hundred Million) ? Int he late 1950s someone purchased a piece called the “Salvator Mundi” which means roughly “Savior of the World” for around £52 at auction. At the time it was suspected or rather hoped it was a Leonardo Da Vinci but had been classified as being by one of his students or assistants rather than the old master himself. 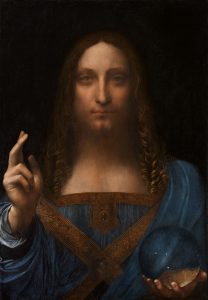 Originally thought to be by Giovanni_Antonio_Boltraffio, but over a decade of intensive research by experts in the field, they have now declared it a genuine Da Vinci, and transformed it from the £52 (approx £450 in todays money) into £100,000,000 dollars. There are reports of a few times its changed hands, but the prices seem to have varied wildly with no fixed points. Given it changed hands as a Boltraffio rather than a Da Vinci  it doesn’t much matter. You can read some of the prices in this article.

It does seem the current owner has held it since the mid-2000s and has spent the last decade having it verified by the experts in the old masters. I tried to get an estimate on how much money has been spent on trying to authenticate the paintings origins, but I came to a dead end multiple times. I can’t imagine it was cheap and hell of a risk too.

What is interesting is, this could well be the ONLY Da Vinci painting held by a private owner, the other 19 paintings are all in museums, this fact alone means this truly a unicorn in the painting world and may drive the premium by as much as £50,000,000 extra.

One website claims there maybe a conglomerate of 1,000s of people some with deep pockets, some not so deep who will club together and buy shares using blockchain technology, which could cause a major upset if it succeed.

You read about how Blockchain technology is affecting the art world in this Forbes Article.

Image of the Salvator Mundi courtesy of Wikipedia