A while ago I posted a few shortfalls of myfitnesspal, and I also wrote to MyFitnessPal with the issues. The main issues were, the way it tracked water. Where you had to physically go to the drop down menu every day and choose “add water” then scroll down to actually add water. 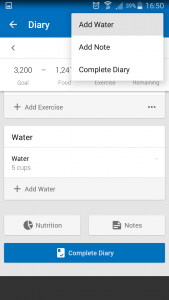 The other issue I pointed out were the tracking of Sodium and Salt. The app fails to differentiate between Sodium and Salt. It may also be that the people entering the data didn’t calculate the difference. This means a packet of Biltong which has 2g of Salt is assumed to be 2,000mg of Sodium, where it is actually 800mg Sodium. This means you are always going over your suggested Sodium limit, when in reality you simply aren’t.

You can mitigate this by altering your goal to a maximum 5,500mg, on assumption its ALL salt, which is about 2,300mg sodium. I have set mine to 4,000mg which allows most of the sodium to be incorrectly assumed as salt and some to the correctly identified as sodium. If you are aiming for low sodium, I would probably leave it at the default 2,300mg and accept it as being sodium.

I however noticed about a week to 10 days ago, the “+ Add Water” and Tracker has been permanently enabled making it easier to add and track water… sadly the salt/sodium issue still exists.

There is however some hope, and I’ll message them again in a month or so.

Here is a quick chart with some useful conversions and information on it.

Its common sense but still worth mentioning, when a recipe calls for a “Teaspoon” of salt, if it makes 6 portions, you need to think each one will contain only 1g salt / 400mg sodium not 6g.

Its also worth mentioning when you have sweated a lot, like after a good hours work out, you may need a little sodium on those days, but you should research the appropriate amounts yourself.

I’m going to message MFP again and push the Sodium issue. I suspect its going to be a huge task, since their whole database will need differentiating. I have been there before, the longer you leave it, the bigger and the harder the task becomes.

** 3,200 kcal is an increase for heavy training days not my general count.