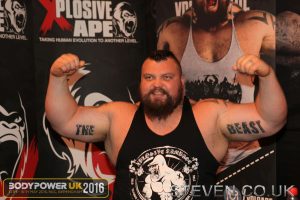 I don’t do Netflix, but I do have NowTV and I’ve watched it maybe twice in the last 5 months. If I didn’t get an amazing deal on vouchers when buying a new TV (pretty much 2 yrs worth of movies, tv, kids and 9 week passes for sports for about £100 a year with 3 boxes. I have Amazon Prime and don’t really watch that other than binge watching the odd series.

I have however watched Eddie Halls Documentary and found it really quite interesting. I will warn you, every other word out of Eddie’s mouth is Fuck or some variation thereof. There are also some strong discussions about drug use too, so be aware of it in the case of your children watching. I know lots of children are fans of Eddie “The Beast” Hall.

Better to review the movie before watching it with you.

The man also loves bacon, in order to increase his calorie or protein intake he adds bacon to everything. I mean literally everything. Much of his system is reliant on his wife, its nice to see her preparing meals and supporting his quest to the worlds strongest.

What I liked about this, is a bunch of guys openly talking about steroids and their use, no one denying it. I don’t believe Eddie contributed but others did. Many body builders and the likes deny steroid ab(use), because yeah that bulging abdomen and keg belly is all natural, because body builders and the strongmen of the past had those guts too. Hearing guys opening talk about it, is refreshing. I have spoken to many of these guys none of them directly deny it, they just use “swim” type language.

SWIM stands for “Someone Who Isn’t Me” and is used on various forums to actively ask theoretical questions where 99/100 times you are talking about yourself. Someone who isn’t me uses X, Y and Z but wondering about taking A as well, do you think SWIM would be ok, stuff like that.

Netflix and Strongman is the New Chill

If you have Netflix and are interested in Strongman and Strength Sports its well worth watching it. If you have a missus who is into strongman, then I’d say this movie is the successor to Netflix and Chill, its Netflix and Storngman with some chill later in the day.

There is video footage of his Arnold Schwarzenegger “Classic” deadlift where Arnold is willing him to break the record. There are interviews with almost every name in the strongman world and many of the body building greats.

Its good to see Zydrunas Savickas actually talking, I’ve met the guy half dozen times and generally the language barrier means he says very few words and seems almost overwhelmed. Hard to not like the man, he seems very intelligent and is actually a political force in his home town all while being a gargantuan beast of a man.