We’ve all been tempted to park part on the pavement to create a little more room on the road so cars can make easy progress, not to mention so they won’t clip your car. Door mirrors aren’t cheap but are required by law, so don’t want to lose them.

You have seen it just as well as I have, where some inconsiderate little jerk-off decides to park too close to a corner, or double park on a road thats too narrow or generally just get in the way. Even worse there seems to be a range of white-van-men, couriers and taxi’s who decide to mount and drive along the pavement to make progress or pull up wherever they feel like. Many use this method to pull on to the curb at say building number 49 and drive along the curb to number 180 without queueing in traffic or to make it around traffic to turn a corner some way up the road. Others have a habit of parking as close to possible to the school / pub / shops creating a serious hazard just to save a little time at the expense of others.

Inventor Yannick Read, 47 from Bristol a member of the Environmental Transport Association (ETA) has drafted an idea for a gadget he calls “Catclaws”, and has so far in the last year had a pretty good response to it. I would speculate that this is being fuelled by fact 43 people was killed as a result of drivers mounting the curb and driving on them last year. Not to mention the terrorist attacks using cars which have mounted the curb, which would be greatly reduced had their tyres all been shredded by speed. 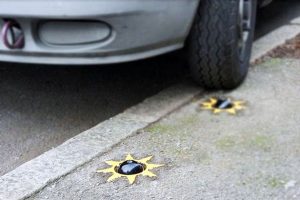 The gadget works like Cats Eyes, you know the little reflective studs on the motorway, only these are situated on pavements (away from the curb stone), so when a car drives over them in either direction, they burst the cars tyres in a brutal way. The devices have what appears to be a loaded spring which can detect the difference between a bike, a pram, or anything under a certain weight.

Its interesting that the inventor says the device is cheap to make, it uses only 4 commonlu available parts put to gether in such a way which makes the invention. Its also possible to add a solar powered illumination so they are lit up and easy to see at night, which I think would be essential, along with reflectors perhaps a Cats-Eye-Claw is the answer.

There is also a downside, sometimes you are pressured or obliged to mount a curb, such as when a liveried police vehicle instructs you to, or when other emergency services are trying to pass you. What about when your making a tight turn or parking and you need to roll over the curb, or accidentally mount it. Its an expensive lesson to learn, that device looks like it would destroy the inner tube which is £20 and the tyre on my car that’s £167 on black circles, so call it £200 per corner, if it takes out both tyres on 1 side, thats a £400 lesson.

Now thats not even allowing for damage to the alloy wheel / rim during rapid de-pressurisation, will certainly crunch the edge of the rim on initial impact and grind upon turning, I’d guess your looking £300 per corner including a lathe finish on the alloy.