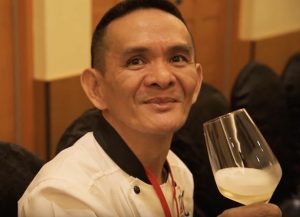 This is an interesting story, Michelin who give awards to the best of the BEST in the food world have awarded a street food vendor or “hawker” a Michelin Star. To give you an idea of how much of a big deal this is, in the whole of the United Kingdom there are only 4 such places, in the whole of the United States of America there are 14 of them. This is the first time a street vendor has been honoured in such a way with a star.

Chan Hon Meng who is 51 and born in Malaysia, is the chef at Hong Kong Soya Sauce Chicken, Rice and Noodle Stall in Singapore initially thought it were a joke when the world class restaurant reviewers invited him to attend the awards ceremony.

He went on to asked “Are you joking?, Why would Michelin come to my stall.” he continued “I’ve never heard of Michelin visiting a street stall, can a hawker even be nominated?”. Michelin told him “We only judge based on the food, not on the venue.”.

Interesting that Michelin are leaving the comfort of crazy expensive venues and actually looking high and low for the best food in the world.

I think its brilliant that a street vendor can be elevated to a global level, especially one who works a 17 hour day, selling over 180 chickens worth a day and charges around £1 per tray to huge queues of people. 35 yrs he’s been working and perfecting his art, its even more special because he says 30 yrs ago when he first qualified as chef, his peers told him the highest honour for a chef to attain is to be in the Michelin Guide, and none of them believed Michelin would come to their neck of the woods.

£1 for a tray of Michelin star rated food, that maybe worth travelling to Singapore for it.