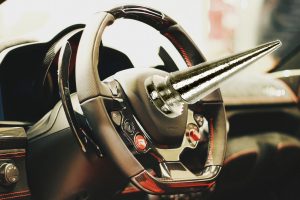 I recently read an article about Google Patenting a Sticky Car coating in order to protect pedestrians when they are in an RTA (Road Traffic Accident). The idea is quite funny, basically when a pedestrian is hit by a car or other vehicle they will stick to the vehicle. Yeah like stuck to the bonnet rather than being thrown off or dragged under the vehicle.

I guess it makes sense that lots of injuries are caused after the initial impact but the idea of being stuck to the vehicle is terrifying especially if its a looney driver or criminal. Initially google planned this for self driving cars, which makes the lunatic driver scenario moot but still the idea is scary.

Anyway this brought the memory of a guy called Gordon Tullock, who way way back when seat belts were becoming mandatory came up with the idea of Tullocks Spike or Tullocks Dagger as some call it. It were more a thought experiment, which I sometimes enjoy doing, but more later.

He questioned if dire consequences of driving were ever present would it make people safer drivers, his idea were a dirty great big spike or spikes on steering wheels to keep the mortal danger forefront of your mind. Currently, assuming the driver is wearing a seatbelt, their survival rate is actually really good and they are somewhat insulated from danger. Its not great for pedestrians, cyclists and similar who are hit by vehicles.

Modern cars are very safe for the driver with impact absorbing steering columns, side impact bars, crumple zones, side airbags, leg air bags, pre-tensioner seat belts, anti-submarine seats, multiple front air bags, whiplash reducing seating systems, and the list goes on. For pedestrians and those outside the vehicles the protections are somewhat less, including softer bonnets, crumple zones and some other bits, but at speeds of 20mph+ the victims survival rates drop faster than a rock. 20mph is 95%, 30mph is 45% and 40mph is 5%, beyond 50mph you’ll need a miracle.

Would you’re almost certain death, make you take less risks ? This is called Risk Compensation, an easy way to envision this is compare 2 scenarios.

First, lets say you’re walking through the jungle and you find yourself surrounded by little green lizards like Newts, you’re not going to be that careful as they are kinda toothless and not aggressive or a threat. Now suppose you’re walking along, only this time you’re surrounded by man-eating Nile crocodiles which weigh more than your car with huge teeth. Risk Compensation says the bigger risk, the more care you take, thus a big effing spike would make you a safer driver.