I finally succeeded at passing my driving test, I say finally but given my first driving lesson ever were less than a month before hand, I guess it weren’t that long. It just felt like longer due to the pressure and rushing to fit it all in before my shoulder surgery, work issues, business and other stuff. I’ve included more about my theory test and driving test results later along with some commentary.

First things, my Driving Instructor were John Swain (FB link) or 07968956860. He does both slow and steady as well as high intensity driving courses. Basically this is lessons from 1 hour to 5 hours (with breaks), between the hours of 6am-8pm. He can be flexible beyond that too, but best to talk to him about your specific needs.

I did a mixture of lessons, I went with 3-4 hours for my first few lessons, then between 1.5-3 hours, using the longer lessons to work on my sticking points. I believe it were a total of 11 lessons, spread over about 3 weeks, with lessons from 7am to 8pm fitting around my work timetable.

What I will say is intensive teaching seems a little overwhelming at first as you literally dive right in. Lots of things, for example moving off safely, at first I were thinking, where are my peddles, check mirrors, look over shoulder for blind spot, damn it man you forgot to indicate, indicate on, check mirrors, look in blind spot, press clutch down, find my gear stick, move into first gear, its been too long, check my mirrors, and blind spot again, slowly raise clutch, don’t stall, find the bite point, don’t stall mofo, check my mirrors again, steer out the spot, last glance to right, ease on the gas, mirror check, off the clutch fully, and pull away.

Once you’re more in to it, you don’t think so much about the actions, or sequentially its more check mirrors while getting into gear and finding bite point, blind spot check, move out, speed up and away. The intensive courses made this process harder at first but the extended driving lesson time meant you could keep trying and trying and get it nailed. 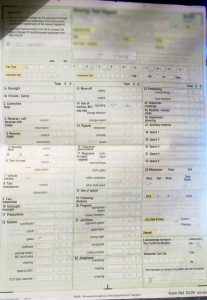 My test started out potentially really badly, firstly the number plate I were asked to read had a bolt and cap in one of the letters, which made it near impossible to determine M or N and possibly even a W. Angela (my test examiner) struggled a little too, but I chose M and upon inspection at about 5m we both agreed M.

For reference in this instance its the examiners discretion if they accept M/N/W and your option to ask to read the car next to it or another plate, if you wish.

The nitty gritty, I got 3 minor faults. One of them were as simple as poor positioning of my left foot and the heel got caught on the floor mat so I fluffed some consecutive gear changes. The other 2 minors were for mirror/signal category. I’m not 100% sure where they were, but I’m sure 1 of them were signalling (indicator) before a mirror check. I’m working on this, when I’ve been checking my mirrors on approach to a turn, I have sometimes forgotten to double check or rather include a dedicated mirror check.

I made an absolute point of NOT looking at what my DVSA Examiner were writing or marking, I didn’t want it to distract me. This is why I’m not 100% what the minors were for, other than the gear one.

I asked Angela for an extra critical assessment at the end to which she jokingly offered to add some extra minors if I liked. To be crystal clear I’m 100% sure I earned those 3 minors and they were genuine. I included mention of this joke as often I hear examiners are very stuffy, but they are only human. In her more critical assessment she said her only suggestion were work on mirrors and observation in general, everyone always need more observation. In general my driving were fine. 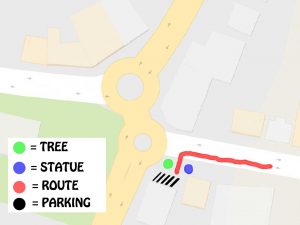 On my test day, a really helpful thing happened, confusing at first but helpful. Right by the test centre in Bredbury is a BP petrol station, which has a HGV/LGV fuel pump (I’d never seen one, or noticed before). We needed air in one of the tired and a screen wash refill to make sure all tip-top for the test. A large truck was in the right lane, indicating left, so I’m thinking slow down, give it space, its going to turn left at the lights. Suddenly its hazard lights come on, it did some weird positioning and manoeuvres, so I come to a near stop, then it became clear it were heading into the petrol station.

It were an excellent thing to happen, and taught me when you’re going to perform unexpected manoeuvres bang the hazards on and hopefully the cars behind will give you extra room. The first day I were driving, a transit van pulled up towards the end of a one way road, and banged the hazards on, so I hung back an sure enough the driver performed a tricky reverse park into a obscured drive way. His hazard lights meant I allowed space and all good. 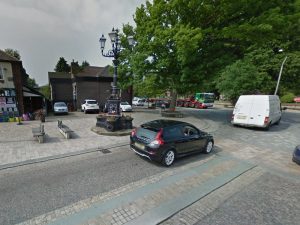 The pic on right is a place I sometimes park to stop at the pharmacy and its a nightmare, the green dot is a tree, the blue dot a statue and the red line is my route of travel. Invariably people expect you to enter the round about, so when you indicate left into the concealed entrance between the tree and statue you’re risking a rear end bump. I have seen many actual bumps and near misses in this very spot. When I approach now, I bang my hazard lights on about 2-4 car lengths before the status and the car behind me almost without exception drops back and I can safely make that turn.

Just for completeness as I have said before, I passed my theory with 49/50 on questions and 67/75 on hazard perception, which is a very good score, since I had never had a driving lesson before. 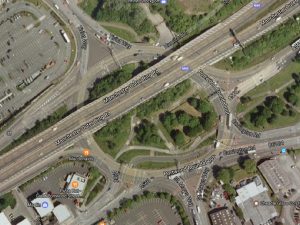 Huge Round About Portwood

My early days driving has highlighted many things, many of these things are linked to potentially overly confident drivers, or perhaps drivers who were trained the old ways. My mum for example said she had never seen a round about with more than 2 lanes before. She as a younger person had never even seen or been on a motorway as a passenger.

The biggest round about she encountered for years of driving were 2 lanes, and she never came across one with lane guidance which negated the need to indicate in the first decade (see left). Lots of other things she had to figure out as she came across them. There is a growing argument for drivers to take refresher tests or a second driving test to see if you’re still safe, I can see why. I can however see that actual driving is about the road not the book, so I’m not sure it would help massively.

I get the feeling many of the things which confuse me as a new driver, are because I’ve been taught the 2016 way, and my mother were taught the 1990s way, my older sister the 1980s way, and so on.

Its not so much people are driving wrong, they are just driving to a different era and we all have to find a working middle ground, and get by.