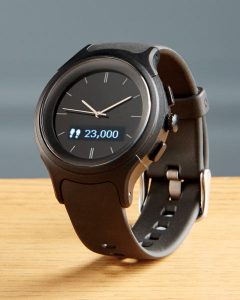 I’ve been told many times I’m a caveman, mostly because well long hair, full beard, I kinda look like a caveman, but equally as often because I’ve had only 3 different ring tones since 2002, the Do-Mi-So were the longest standing, I use big-ass over-ear Beats Pro headphones, I refuse to move with the times in certain areas. I also have refused to get a smart watch, the shocking battery life and equally shocking prices always put me off, not to mention they are UGLY.

The Moto 360 has all the featured I wanted, but damn the “flat tire” effect is nasty, but I were lead to Analogue Smartwatches or Hybrid Smartwatches depending on whose terminology you prefer. I like Analogue Smart Watch but then I’m a caveman.

My local Aldi were doing a Clearance Sale and they had big chunky analogue smart watch, it has basic shower / sweaty beast 5 bar water resistance, notifications (calls, texts, whatsapp, etc), step counters, goals (calories, distance, steps), and some other feature, and it were less than £15 quid. I got dragged kicking and screaming into 2017 by my mother who bought me one, after I told her she should get one since she got into walking (10 miles a day she does).

The step counter seems very accurate but doesn’t count everything, like for example, I use an elliptical trainer instead of normal jogging (saving my knees) and it doesn’t count the steps, it randomly counts leg movements when cycling, and sometimes counts the odd pot hole while driving.

The battery seems rock solid, but I’ll report back once I’ve been running it a full week.