Late last year my shoulder surgery was delayed for one reason or another so to fill the gap I booked a dozen or so driving lessons over the 4 weeks gap between cancelled surgery, after passing my driving theory test first time a few months before. In the theory test I scored pretty close to a perfect score. Only 1 question wrong in multiple choice which still haunts me as I know exactly which question it was. I was also a little slow on one or two hazard perceptions videos but still nearly perfect is good enough. I started my driving lessons towards the end of January. This meant I had driving lessons in the frost, in the fog, in the snow, in the rain and ice and all that’s in between giving me really good all around experience. The worst was stuck in rush hour traffic on a 1/4 mile hill, which moved a few cars at a time, and meant non-stop constant hill starts, which was about my 4th driving lesson so yeah that wasn’t fun. When I passed my test about 4-5 weeks later I had 3 minor faults so my Driving Instructor John Swan did a pretty good job, in a very short space of time and literally just a few days before my surgery. 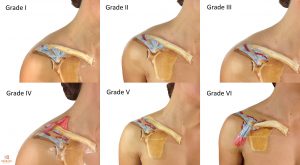 AC Joint Grades I to VI

My shoulder surgery turned out considerably more complex than planned, originally it was a Rotator Cuff Repair, and AC Joint Repair, it changed something much more once my shoulder was opened. My shoulder healed record fast, I was discharged from physio in just over 2 months, out of a planned 5-6 months. The surgeon wanted to discharge my left shoulder at 4 months, as fully healed and fine, out of an expected 9-12 months. All in all the healing process, very quick for the amount of work I had no one expected it to be so quick.

My return to the gym hasn’t been so quick, the many areas bone was cut away, or ground down was raw and exposed and then left soft and gooey, waiting for the scar tissue and hardening has been a long slow process. It was expected to be 18-24 months before fully healed. I could put some moderate weights on it at 6-7 months, by some I mean about 40% my maximum, where as a month before surgery I could manage about 20% of my maximum. For example bench-press, my max as been around 115-120kg (including the bar), a month before my surgery I could barely move 30kg with bad form, now I can move 50kg for 8, so definite improvement but still long way to go.

I have done my first actual shoulder work out, including farmers walks, waiter walks, shoulder press, shrugs and upright rows, my grip is screwed, not sure I’ll get that back due to a torn tendon in my forearm and damage to my hand, so maybe stuck using straps and hooks. It has however 100% improved from pre-surgery, however under load when the bones appear to be touching, OUCH!

I don’t think I’ll ever be able to squat again, the work on my glenohumeral has almost certainly left me with impingements meaning I can’t get my arms into position. Maybe some yoga or pilates will help, but I don’t know. 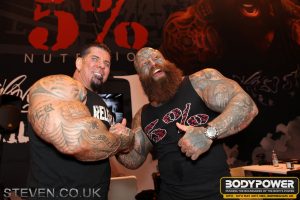 For all the controversy, hassle, and fanfare over the Rich Piana crazy train, the man was a decent guy and a powerful inspiration to many. I don’t agree with his Synthol or PMMA or whatever the hell he was injecting to get his crazy size but he loved his fans and had a lot of respect for them. Way way more respect then almost anyone I have ever seen I’ll never forget him apologising to fans waiting while he did press photo ops, or for the long wait to see him, or even when he took his lunch/drinks breaks.

Not ONCE, did I notice him rush a fan, cut one short, he spoke to them for as long as they wanted, and had a laugh, happy posing with fans, by all accounts he was a rock solid guy.

The only other person who was equally popular who was a chatterbox was Kai Greene, he was being told off all the time his people for taking too long with fans.

Most of my year has been waiting, recovering and planning. Now I’m I’d say 85-88% recovered and able to put some power down on the left shoulder, and I’m not sure I want the right shoulder done.

I started training again between Christmas and New Year’s Eve, so that gives me 9 months out. I’ve lost about 1okg of muscle mass (rough estimate based on my monthly bio-impedance),  and gained about 6-7kg total weight, which is pretty diabolic. About 2 months of that was pretty no gym and comfort eating a lot. I’m getting back on the ball slowly now.

Diet is horrific to reign back in to boring stuff again, I may need to just go for a crash and go meat, veg, sweet potato, and try reset it.