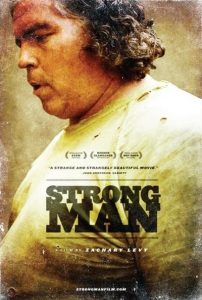 Its been a while since I posted about Arthur “The Ironmaster” Saxon, but there are plenty of other guys who I admire. One other such man who I admire does simple but zany feats of strength. Many of these feats remind me of the old school strongmen, and absolutely of the early days of The Worlds Strongest Man when they was ripping phone books in half, bending iron bars on their heads, lifting huge amounts of money (coins) in boxes and more recently throwing washing machines.

The one which made Stanless Steel so famous, is that he’s believed to be the only man on the planet who can bend a Penny with his bare hands. Its not 100% clear where this penny is from, but either way the size, limited surface to get leverage and small grip space makes pretty much any penny bending impressive. UK penny’s are made from copper mostly, and US penny’s are made mostly from Zinc, and the EU Cent / UK Penny are made of Copper coated Steel.

Zinc is softer than Copper and Steel, so the US Penny should be easier than the UK penny, but either way its impressive. I have tried with the UK 2p which is double the size so better leverage and still didn’t even make a mark on it, using pliers and my hand I could make a slight bend but no where near bending point.

Using 2 pairs of pliers is fairly easy, I would like to try with varying lengths of leverage. This would enable me to work up to the strength, certainly be a fun and interesting training tool, Pleskun achieves his leverage by using a towel. I assume this is to reduce the grease and sweat on his on fingers rather than enhance leverage. 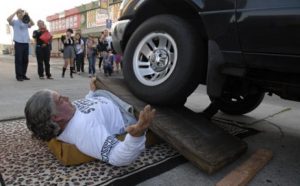 Stanley Pleskun Under a Pickup Truck

Some of the other feats are fun too, bending a kro-bar, a wheel brace and various other metal bars, a more interesting one would be where a 4×4 pick up truck drives over his body with the director of the Strongman Movie driving it.

I haven’t watched the video yet, but along with Eddie Halls, CT Fletchers and various others they are on my play list, been watched or in the process of being watched. I’ve watched Eddie Halls, and I’m half way though CT Fletchers My Magnificent Obsession, I have Generation Iron 2 and Stanley Pleskun’s Strongman ready and waiting.  Its worth watching Generation Iron and Pumping Iron as well.

As best I can ascertain the Strongman video isn’t a happy or fun story like Eddie Halls road to being the strongest. The movie is very much in the same vein as Mickey Rourkes The Wrestler, showing the dark underbelly or the sports-entertainment industry. The place there dreams are either dead or dying. It sounds like a really sort of sad movie, Stanley is just a guy who happens to be really strong and born in the wrong time, he should have been in PT Barnums Circus or the travelling freakshows of old. Perhaps he would have been a contender along with Sandow and Saxon on the strongman circuit.