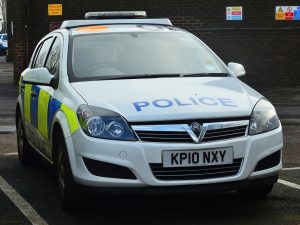 I have had a nightmare getting insurance for my last car, I no longer have the car since Ex Police Car Specialist in Manchester who sold it me, basically sold me a lemon and were dicks about the Consumer Rights Act, more on that another time. Lesson learned, if a dealer won’t, or can’t take credit card, I’d walk away.

I’d already started writing this article, and figured it contained some useful information for others buying ex-Police cars from honest dealers. So I went ahead and posted it anyway.

Almost ALL the main comparisons websites didn’t carry my car’s Trim and Spec (Astra Special 1.3 CDTI) hell most of them couldn’t even find my number plate (KP10 NXY).  When I visited the main dealer (Bristol Street Motors), they put my number plate in and were sure it weren’t a real car plate.

I don’t think a single one of the the big boy comparison sites got it right straight off the bat, and only Mustard.co.uk off the top my head found it at all, I think Asda were able to manually look it up.  The story were the same with most of the major direct insurance companies, only a handful actually found the car. 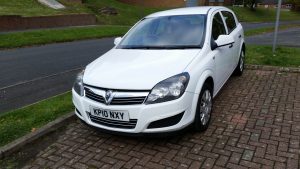 Most my pre-purchase quotes were around £800-1000 on a provisional license, and around £1,800-2,400 on a full license. I decided given my previous experience hunting quotes that I would tweak the options a little using the many accounts I had made until I found the best combination.

There were some outside the above range quotes, my biggest quote were around £5,000 with a £3,000 Compulsory Excess but with some fiddling and jigging, I managed to find an Excellent Deal.

Top Tip: Make a second account with a fake name, who lives nearby (same postal code range, same age, date of birth, job etc, but diff email). The reason for this is, insurance companys record EVERY quote you make. If you test the price for parked on the road, then try parked on the driveway and its cheaper.  If your car is broken into it, and it were on the road but you choose on the drive they can cry about it and refuse to cover it. Experiment with a fake account but very very similar details. Remember don’t enter your drivers license number on this accounts 😉

Its set out in order of most useful down to shocking and couldn’t help at all. I’m going to have a little rant about Hastings Direct and a Kudos to the company I chose in the end, but here’s the run down. Good Luck!

Detected The Trim AND All Engine Sizes
This means they had the make, model, trim and its selection of engine sizes (1.3, 1.7, 2.0).
Admiral (and Bell, Elephant), More Than, Asda, Mustard and Tesco Bank.

Had The Trim but Not All Engine Sizes
These were unable to detect the reg plate, but manually did have the make, model, trim but usually only the 1.7 engine size, not the other two. If you have the 1.3 of the bigger engine, no point trying these.
Zurich, Liverpool Victoria, uSwitch, Go Skippy, Swinton Insurance, Co-Operative Bank, Kwik-Fit Insurance, Quote Me Happy, Swift Cover, Diamond and John Lewis.

Had Car but Unable to Quote or Didn’t Do Online Quotes.
I can’t say don’t try these, only that you need to phone them or them phone you, but were too much hassle.
TheAA and Allianz

As you can see I literally spent hours upon hours trying to find a bargain, and I found one in the end, just not the one I expected before I purchased the car.

I’m giving Hastings Direct a special mention / kick because this were the company I really wanted to go with, their Hastings Direct Premier Insurance ticked all my boxes. The key fact were I was assured that provisional drivers could earn no claims bonus with them. I were quoted around £700 as a provisional, and then up to £2,100 the day I pass the test. I would have to pro-rata this, since I intended on passing in about 6 months at the time (September 2016), my first year would cost me £1400. This £1400 would be made up from 6 months as a provisional and 6 months as a qualified driver, the break down is below for completeness.

On the same phone call I confirmed the Provisional NCB, I were told the fact the insurance couldn’t find my actual trim, but the Reg Plate returned the Exclusiv Spec, which had the correct transmission, engine size, bhp, etc I were told “We’ll be able to cover you, we’ll just need to add the ‘special’ name to your policy.”, so I worked on the basis of this being accurate and would be plain sailing.

I regrettably bought the wreck of a car, I get an estimated delivery date, all I need to do now is call to get my car insured. This is where it all went to hell. On this second call, I were told “Underwriters don’t speak to customers directly, sorry nothing we can do to help, its not something we do”, they wouldn’t even ask the underwriters or whoever themselves or pass me to someone who could.

F*#k You very much Hastings, I spent 2 weeks thinking I had it all planned and were ready to roll before you kicked the stool from under my feet. 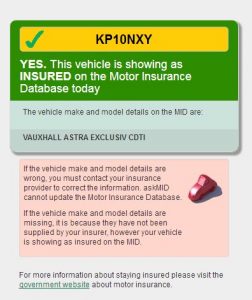 Since I kicked Hastings in the nards, I thought I would give Tesco a special mention. In the end it were them which saved the day. A provisional license holder, parking the car on the road, on a 2010 Astra Special 1.3 CDTi and the quote was a mouthwatering £540.

A whole £160 less than Hastings Direct, which I thought were a good deal.

I nearly snapped their arm off before they changed their mind, an off I went happily insured… so I thought.

The day the care were delivered, I’m sat in the gym, cooling down before a shower. I thought I’d tax the vehicle it showed me the link for Motor Insurance Database (MID) and suggested you check the insurance status before you pay. When I did this, it came up with the wrong trim. It showed Vauxhall Astra Exclusiv CDTi (see right), which meant technically my insurance were invalid.

Tesco definitely showed the correct spec and trim searching with my number plate, and it still does right now. I checked my quote emails, and confirmation emails and they all matched up saying Astra Special. I checked my documents, and blow me if it didn’t say Exclusiv on the certificate of insurance, GRRRR. 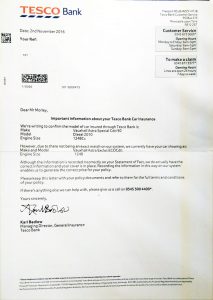 I phoned Tesco Insurance up, which has a UK Landline phone number (01332093098), the advisor on the phone checked all my quote references, and said it shows Exclusiv on their side. He checked it on MyCarCheck and it showed as Astra Special, and he checked Tesco’s customer site and agreed it said Special. So assured me now I had notified them I were fully insured until its sorted and safe to drive. I would need to send in documentary evidence of the cars specification, and the quotes saying special so they could add it to the system.

At this point I were expecting a repeat of the Hastings Fiasco and finding I had no insurance. I emailed in photo’s of the documents, the Tesco quotes, Tesco emails and everything else, and waited nearly a week before a letter arrived from Tesco.

This letter (see left) basically confirmed although the MID says Exclusiv, Tesco has added a note on their systems to ensure the correct model is insured and I’m legal.

This is effectively what Hastings Indirect had promised they would do, so I have no idea why they couldn’t do it, but kudos to Tesco for actually sorting it out.

If you’re buying an Ex-Police car, Tesco, Admiral (Bell/Elephant), More Than, Asda and Mustard are the top pics, given mustards best price promise, it should be a no brainer. Earlier I mentioned their lowest price promise, and as best I can find, this is provided by Adrian Flux who usually are the go to for modified cars. If I had added a DTUK or other tuning box along with a K n N air filter etc, I’d have probably tried them, so maybe worth a look.

I also found it dropped the price by about 20% by adding an experienced named driver, in my case my poor old Mother were added as a Named Driver, this dropped the insurance about £100 for me. So adding a more experience driver, may save you big money, just use one with no convictions, no accidents, no points, basically a clean license.

KP10NXY Car image by Cobalt271, who has a hell of a collection of service vehicle images. He also has quite a bit of information about the cars usage, due to the stream of images. If you’re considering a car which appears in his images, a polite message via Flickr may be invaluable.