There are a few irksome things about Amazon’s Alexa which are a bit rubbish, the fact you don’t have an “Owner Mode” and a “Guest Mode” and the fact you can’t set which search engine to pull results from and the fact 90 times out of a hundred it tells you “Sorry I don’t know that”, which brings us to follow up questions which the AI doesn’t get at all. 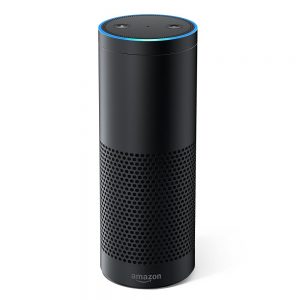 Which is clunky as hell, that’s on the assumption Alexa doesn’t have a tantrum and tell you “I don’t know that but I’m working on adding more local businesses”. However this “Follow Up Mode” in theory means it should work like… 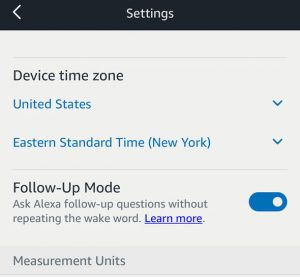 This new “Follow-Up Mode” is disabled by default and needs to be enabled using the Alexa Mobile Phone app, otherwise it won’t work, its as simple as flicking a toggle switch. You need to go to the Alexa App, then select Settings then choose the device you wish to enable it on, and scroll down to “Follow Up Mode” and flick the toggle.

All Amazon Echo Devices will give users approx 5 seconds after their first query to ask a follow up question, during this time frame the blue ring on your device will be lit to make you aware Alexa is still listening. The Follow-Up mode is smart enough determine what is general chatter in the room verse what is a follow up question. Its not clear if it recognises the original enquirers voice or just recognises a question but its said to work.

Its worth noting that if music is playing or an audiobook or similar it won’t remain active as its a fair assumption you won’t be asking follow up questions. Also if you wait too long and the blue ring stops flashing, you’ll need to use your chosen wake word, which is “Alexa” by default.

Saying “Alexa”, “Stop”, “Cancel”, “Thank You”, or “Go To Sleep”, will end your session so you need to start from scratch should you do this. Its also worth noting if your query ends with these it can end your query too.

I really want Alexa to have an Owner Mode and Guest Mode, by Owner Mode, I mean so Alexa recognises the owners voice much like “OK, Google” google can be set to recognise the owners voice pattern but it can be set to accept anyones voice. Owner Mode would be great for general commands, but Guest Mode for when your having a party and you want guests able to adjust the music or change the playlist or control the lights stuff like that.

This would also open up the option of Alexa recognising multiple people, so “Turn my light on” could turn your light on, and when the missus says it, it turns her light on, and the same for any other command, playlists being a key one, adding to your diary and such.

This is available in the USA only for now, but I would expect it to drop in the UK soon, the updates usually roll out quite quickly.

Starting this week Amazon will be rolling out Alexa to Android users who have the Amazon Shopping App installed. It has been available on Apple devices for sometime (apparently). I have been waiting for this, but I thought Google maybe be digging in its heels and would never allow it.

While I’m happy this sort of automation control is coming, I’m equally somewhat disappointed. I was hoping Alexa would come to Amazon Music. Instead it seems its a limited version of the Echo’s Alexa, you can get sports results, weather, ask questions about people and places, get information about your flash briefing and appointments etc.

It would also appear you can install “Amazon Skills” which extend functionality, which means your mobile phone or android device will become a sort of “Echo Phone”. A few places have suggested you will gain some degree of control over your IoT/Smart Home devices so you can use your phone to turn off Echo compatible devices.

I haven’t found any mention of Amazon Music or Prime Video controls which would be excellent. I primarily listen to music and watch prime video whilst I’m in the gym. The ability simply say “Alexa, Play my Lifting Heavy playlist” or “Alexa, Play my CardiNO playlist” or skip that slow track when you’re half way through a sprint or run would be amazing.

Equally being able control volume, and change tracks without having to physically touch your phone means you won’t miss a beat while working out. The implications for personal trainers who use bluetooth speakers are huge, they could tell Alexa to load the certain Circuits or change to a faster track, to start and stop timers an more.

Even though I can’t find evidence of music and video control, that doesn’t mean its not there, and if it isn’t I’ll be the first to rave at Amazon to get it sorted, fitness is a huge market and an excellent penetration point. If they haven’t gone there, then frankly heads needs to roll.

Its one of the major functions I miss of having a Samsung, the Air Gestures, so you can wave your hand left and right to change music track and up and down to alter the volume. Given the number of phones which have Proximity Sensors it amazing how few companies actually use them. Alexa could be a massive overhaul and improvement to this, lets hope its coming.

I also anticipate that Amazon may produce their own version of an Android Laucher, like N Launcher or Nova Launcher so they can convert nearly any phone into an Echo Compatible device, that seems to be where I think they are going.

Given that Alexa can work out which speaker you are nearest too and deliver information to that speaker, its aware of where you are, moving this feature into your phone could be interesting. My friend regularly uses an Echo Dot at house parties and tells me he uses the Alexa Remote to control the device since it often can’t detect his voice over the noise, so having your phone able to fill this role would be cool.