Some of you who read my health/fitness blog before I moved to blogging here, will know I have quite extensive injuries/damage to both of my shoulders. The consultant doctor who interpreted the last scan (an MRI) used fun words like “Tumorous”, “Cystic”, “Moth Eaten”, “Jagged” and “Arthritic”, lots of fun words like that. The only upside were my rotator cuff has “improved” and is “better”, I couldn’t get him to quantify more than that. Its some times hard to get solid answers, even harder to get the various clinics, consultants, doctors, registrars etc to sing from the same hymn sheet. As a result everything is a little sketchy, and this may not be 100% accurate. 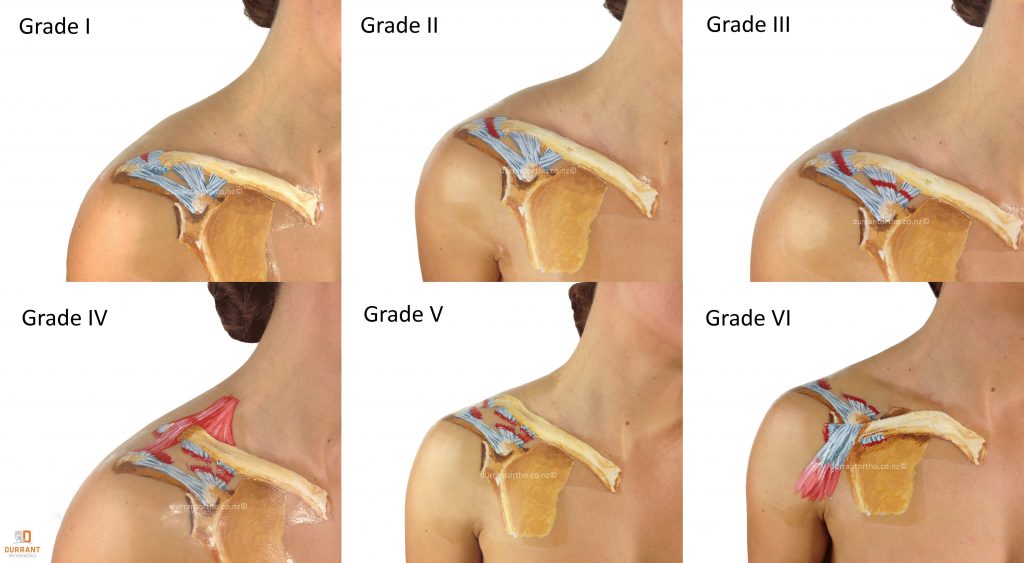 The rather informative Durrant Ortho site has a page on AC Joint Injuries which is awesome and where I borrowed the above image. Mine is somewhere between Grade 2 and Grade 3, its hard to visualise from the descriptions and various explanations but it fits. I’m told once the surgeon physically look inside my shoulder they will tell me exactly what damage were and what were fixed/repaired once I’ve come around from surgery.

After a boat load of therapies and various drugs, the last being Triamcinolone injections along with a nerve block (I think), which are injections directly into the shoulder joint and injured areas, which hurts like hell. After that, they finally transferred me from the shoulder specialist to the shoulder trauma clinic. The trauma clinic tell me I have about 4 weeks to make my mind up if I want a rather painful surgery on both shoulders or try more injections.  Since its both of my shoulders which are messed up, they would perform surgery unilaterally about 18 months apart.

Currently the surgery waiting list for a case like mine, is 2-4 months, which lands the surgery Dec-Feb.

The timeline and pain doesn’t sound good at all. When I asked about the pain score, on a scale of 1 to 10, instead they only described it as “horrendous” rather than a score, so I’m guessing that’s about 11 out 10.

They went on to explain they going to cut some of my shoulder blade (scapula) off and my collarbone. I didn’t quite catch what about the collarbone. The also very good ShoulderDoc website, which I borrowed the below image from, gives loads of details about the surgery and what happens. It looks BRUTAL! 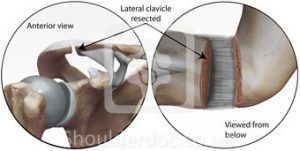 They are also going to clean up my shoulder, which I understand would be removing tumours, cysts, ground bone chips, calcium deposits, general clean up and tidy of the shoulder joint.

The “official” word on the various websites inc the Local NHS and Others for recovery and rehabilitation is up to a week in a sling before starting physio, 1-2 weeks before returning to sedentary job, up to 4-6 weeks for a physical work and back to 75% in 3 months. Then up to a 12-18 months for fully healed, slowing improving the whole time.

The shoulder trauma consultant (I think she were a registrar, but not sure) used various patients to give me examples of healing times and recovery. She were saying its more likely to be near enough double what the official story says. It could be 6+ months before I could return to the gym, and 18+ months before 100%, at which point I’d need to start building again.

Looking at the comments and questions online for example Sports Injury Info makes it look like it could be even worse than that. However the problem is that ACJ Repair, is like saying Car Engine Repair, it could be any of 100 things, all with different healing times. Some have a Rotator Repair (which is a bigger along with Shoulder Girdle), some only the scapula filed, others just a ligament cut, some need extensive stabiliser work, loads of different things. There are also various techniques as well open or keyhole surgery which affect it all too.

Its wildly varied, and inconsistent.

The only consistent thing, seems to be when you cut parts of the bone away, its intensely painful, and a long slow healing process, lucky me. The things I’m dreading the most are (1) the surgery falling during icy/frozen times and me slipping, (2) person hygiene with my right arm essential out of order for months and (3) being out the gym for months.