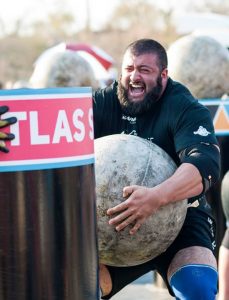 Konstantine Janashia Known As The Georgian Bull – Img by WSM

I posted way back in August that Konstantine Janashia aka the Georgian Giant or Georgian Bull if you listen to Colin Bryce is one to watch. Watching him perform were a little tarnished, not because of anything he did or his performance, but because there were so much spectacular new talent in this years Worlds Strongest Man.

It were bordering on biblical, with the 4 Horsemen riding in to town to challenge the old guard, upon the ashen horses rode Mateusz Kielszkowski, Grzegorz Szymanski, Martins Licis and Konstantine Janashia.

Lots of new blood in Worlds Strongest Man this year, lots of potential and this experience will have given many a new set of goalposts and without raised them up.

I’ve just re-watched it again, which makes it about the third time now.

A Quick Round Up

In the 825lb Frame Carry event, Janashia destroyed Brian Shaw by a huge 6 seconds, and Hafthor Bjornsson, well you’d need the Hubble Space Telescope to see across the 30 seconds gap between them, only the above Kielszkowski who pretty much sprinted the 30 meter course 11 seconds faster than Brian Shaw.

In the 100kg Circus Barbell, he beat Brian Shaw again, Brian looked to be struggling and I think Janashia still had 1 more rep but ran out of time, Shaw looked struggling to match him.

In the deadlift, Konstantine matched Bjornsson at 420, with only Eddie Hall, Brian Shaw and JF Caron beating him by 25kg. That 25kg did make it a new world record but you can see thus far how Konstantine Janashia is making some pretty big waves for a WSM Débutante.

In the 40 Tonne plane pull, he were just 40cm between Eddie Hall, and 85cm behind taking first place, and the Kettlebell Throw he scored just 5 seconds behind Eddie Hall to gain 5 over the bar.

Lastly in the Atlas Stones you saw him come unstuck, he were only just getting to the 4th Stone up while Eddie Hall had near completed all 5, Hafthor, Shaw and Eddie all completed the full 5 stones up to 210kg in the time it had taken Konstantine to do just 4.

The Stones is a big event based on technique, and skill to wield the strength, and he has shown he has the power, strength and speed, he just needs to hone his skills and nail that technique. You could see in this grand final that he were standing toe to toe and took a bit of a beasting but still he stood toe to toe.

There were the odd event variance, where they used a Viking Press with Canoes, or Fingals Fingers for example, had ALL the competitors had the exact same -semi-final events, I think the Grand Final may have had 1 or 2 different faces.

It really could have gone another way if some of the shorter contenders had Fingals, or some the weaker endurance guys the car carry. If there weren’t an injury or two during the semi’s the finals would have looked different for sure, and if Big Z weren’t out I think the Podium would have certainly been different.

Really looking forward to seeing Konstantine and the other 3 horsemen excelling, I just hope this event has given a sample of the good stuff and increased their hunger. I remember feeling this way when Savickas showed crazy strength potential, the same moment when as a kid I saw Kazmaier do the original Crazy Eyes and you could see the raw passion, the same as when Pudzianowski went full on Berzerker Rage and earned the name The Dominator, exciting times.